A dialogue on art, philosophy and self irony

5 Fake Flags That Are Not False 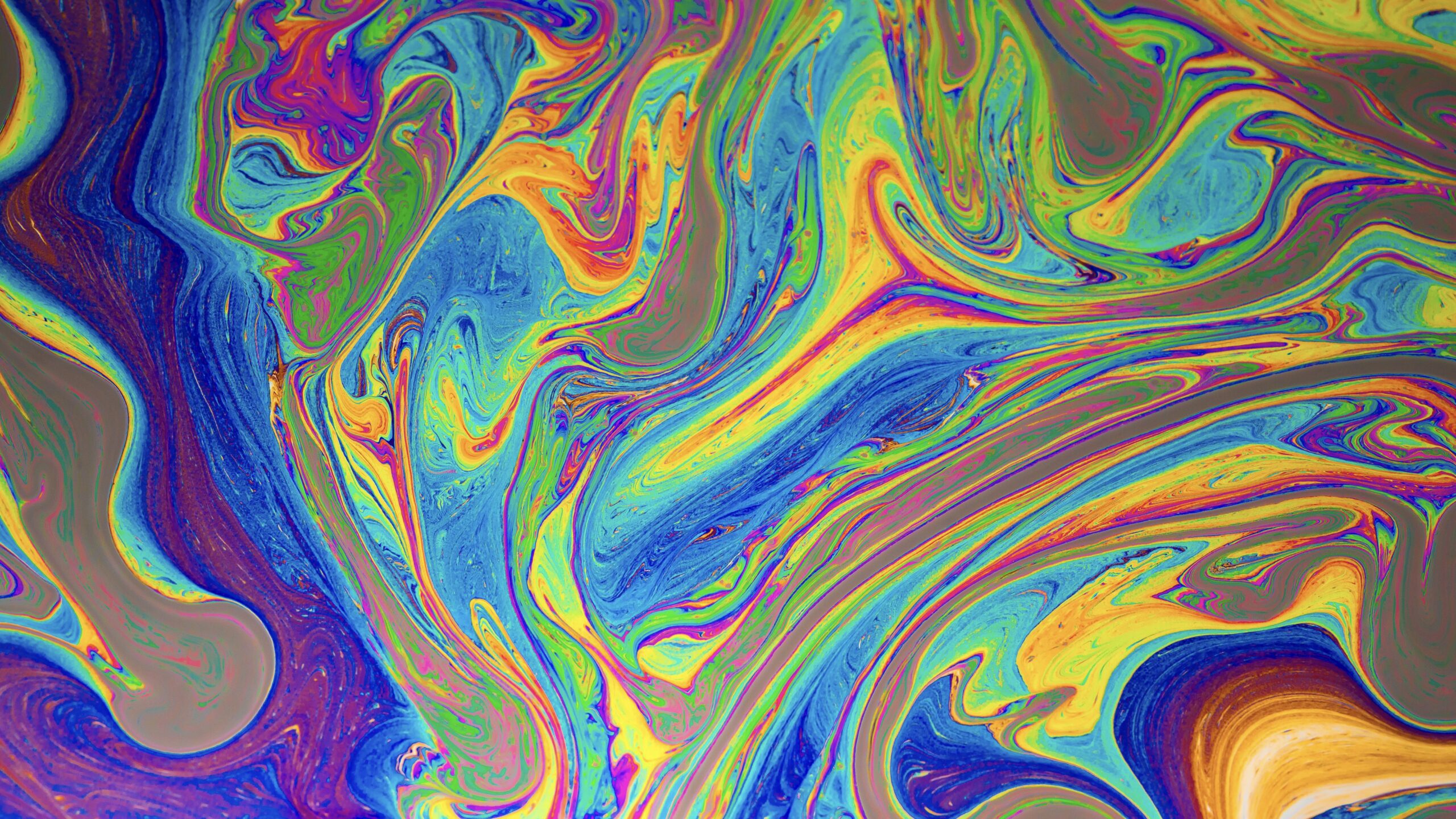 Unlike 'false flags' that are intended to cover some military motives, fake flags made by artists are the other way around. They send clear messages which, depending on the piece, just need a bit of the viewer’s effort for its decoding. Thus, even though they're a civil move or better to say, a poetic gesture, those artistic flags are equally political – even when they are deliberately neutral. Some of them are a pure piece of art, while others are purely a message. This ambiguous nature of artificial flags, compared to the symbolic value of the real ones (as if those weren’t human-made, too), galvanized the creation of this article.

Vexillology, the study of flags, has developed an entire system that helps to unify them, or even come up with new ones, which has eventually taught our eye to distinguish it from another type of painted textures. Usually, it’s stripes, normally up to three colors, circles, stars, diagonals, some moderation in palette choice. Usually it symbolizes a territory, an origin or an identity of a person or a group of people. Accordingly, in order to create a new one, artists have to use these rules or come up with their own.

What if an artist decides to draw a flag to an extent where it completely mimics the original? This is what Alain Balzac did in 1995, coming up with a series of paintings that solely recreate real flags. China, South Africa, USSR, Saudi Arabia, and Palestine – a French postwar and contemporary painter completely replicated them all.

The whole piece of canvas, 70x100 cm, has no room for anything else, leaving us to attempt an interpretation and consider the choice of regions. “For Alain Balzac, the painting and the flag are a single piece. The signs are both national symbols and abstract geometric figures. [...] More than for any other, the meaning of the work will for sure be different according to the viewer's place and time”, as written in a catalog of ‘Utopia ici ou là’ exhibition (quoted by FOTW).

The depiction concerns different works, which had been implemented a few years prior to the series. However, that last sentence surely has a lot to do with the relevance of the ‘de la Palestine’, for instance, in light of the later and still relevant events.

Kimsooja, “To Breathe – The Flags” 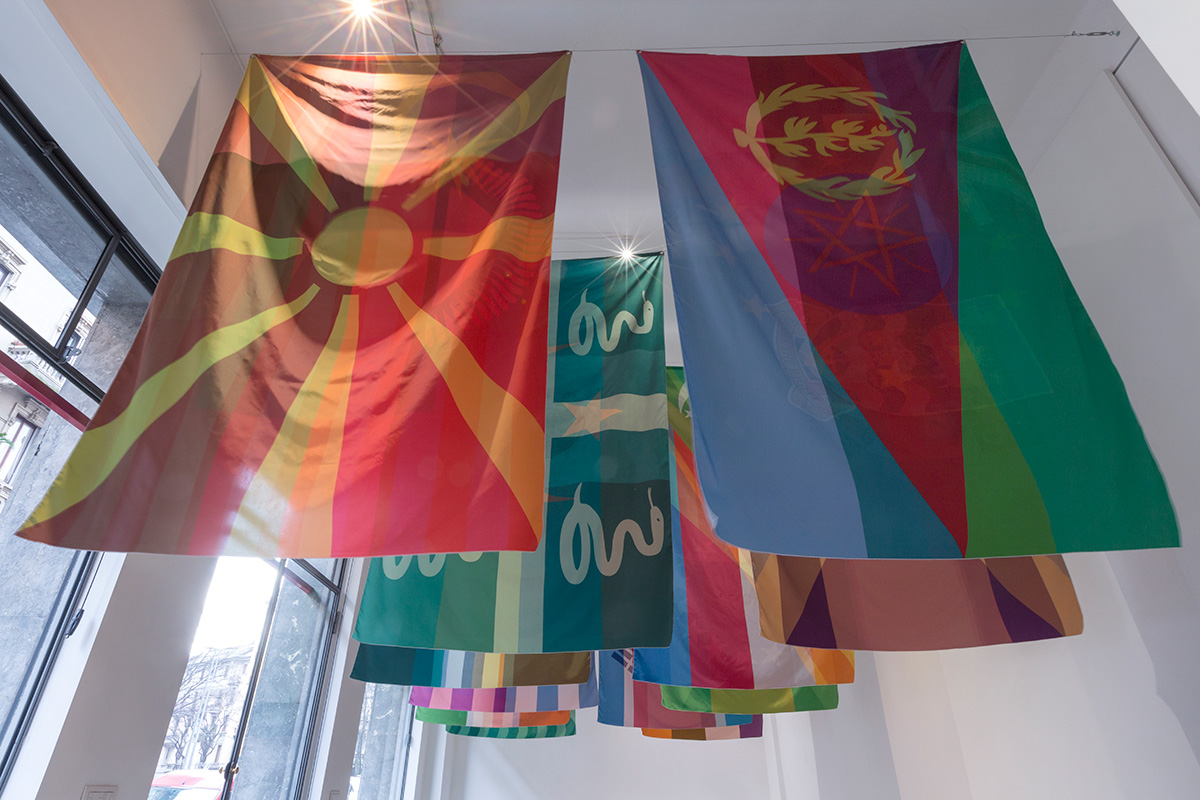 A possibility to move around the world freely, not even paying attention to borders and, well, flags, sounds like an inherent element of freedom itself. However, only very few can consider that an option, while for the rest of us it remains a privilege. Born in Korea, based in Seoul, Paris and New York, artist Kimsooja is like no one else familiar with the concept. She is constantly recalibrating and broadcasting that idea of what it is to carry your background with you wherever you go, as well as to be this sewing thread, or a piercing needle, as in her famous ‘A Needle Woman’ video performance, between the countries. 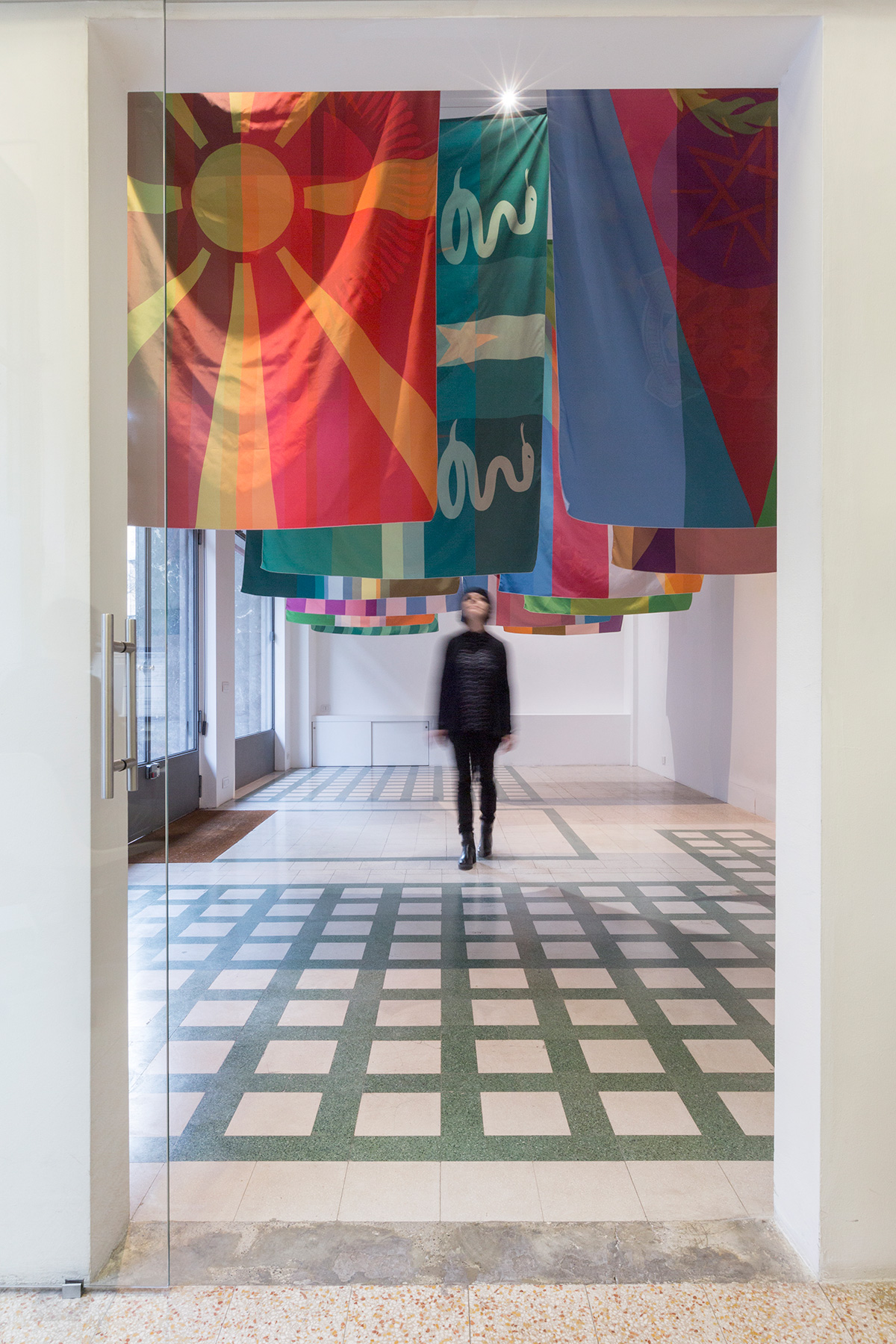 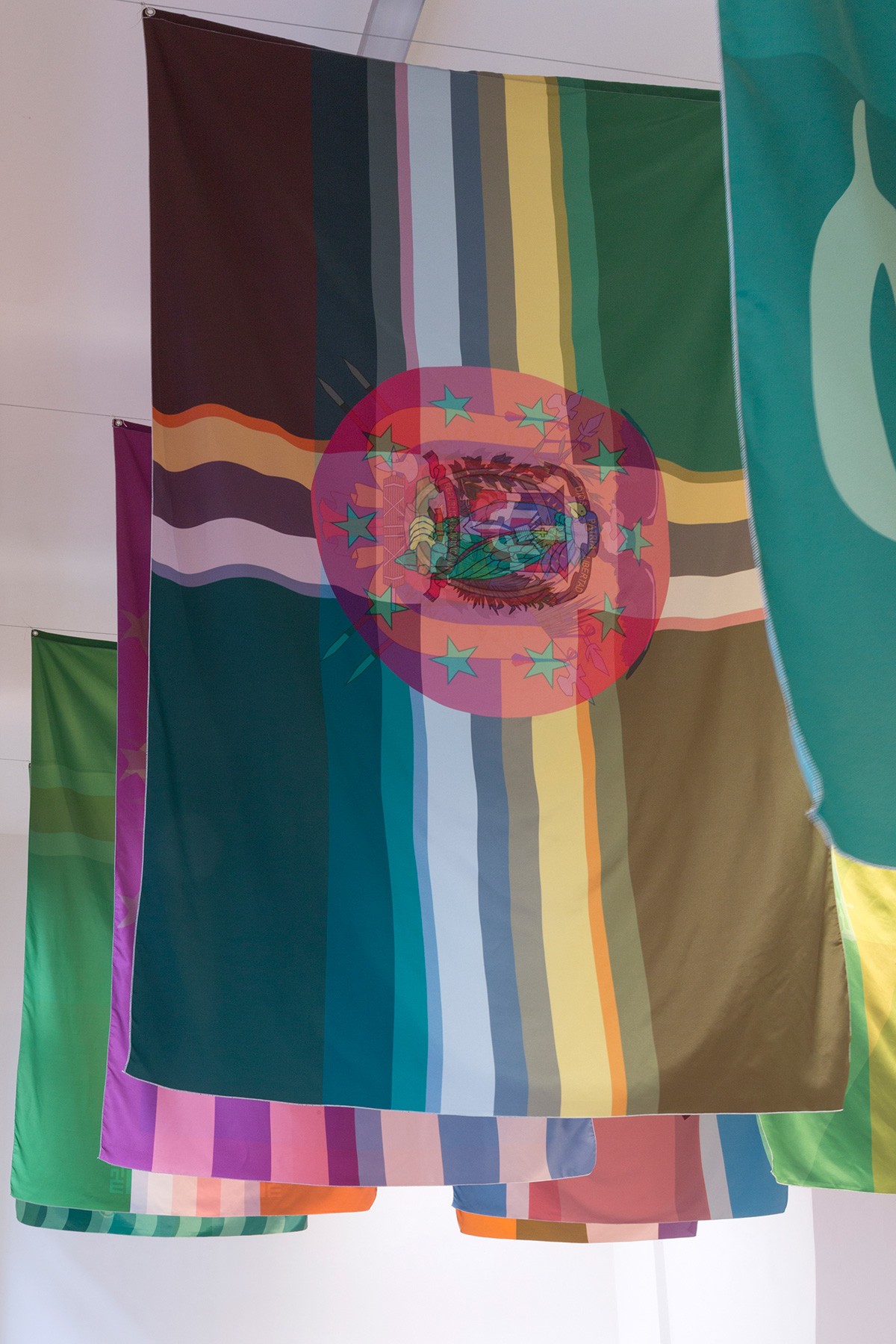 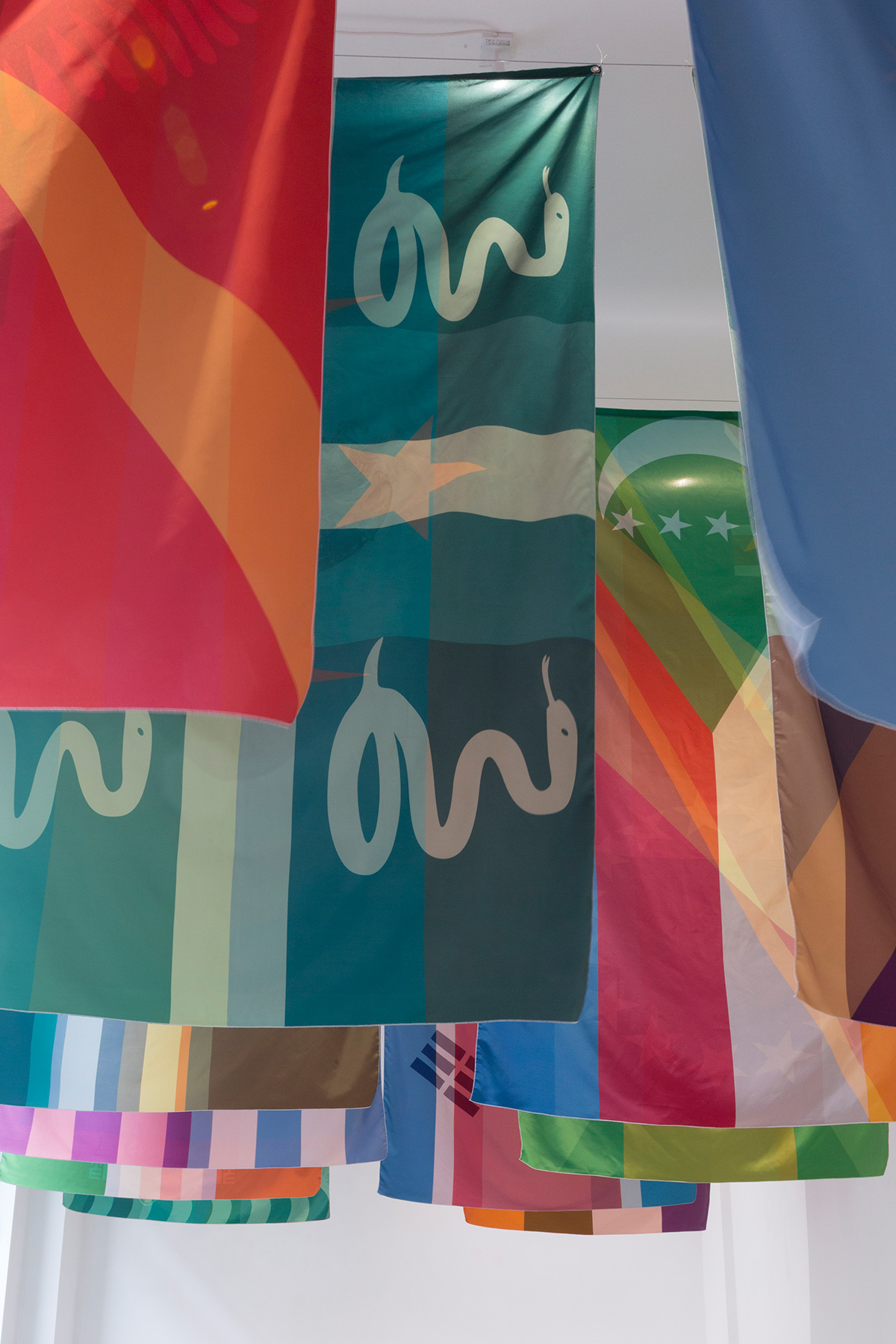 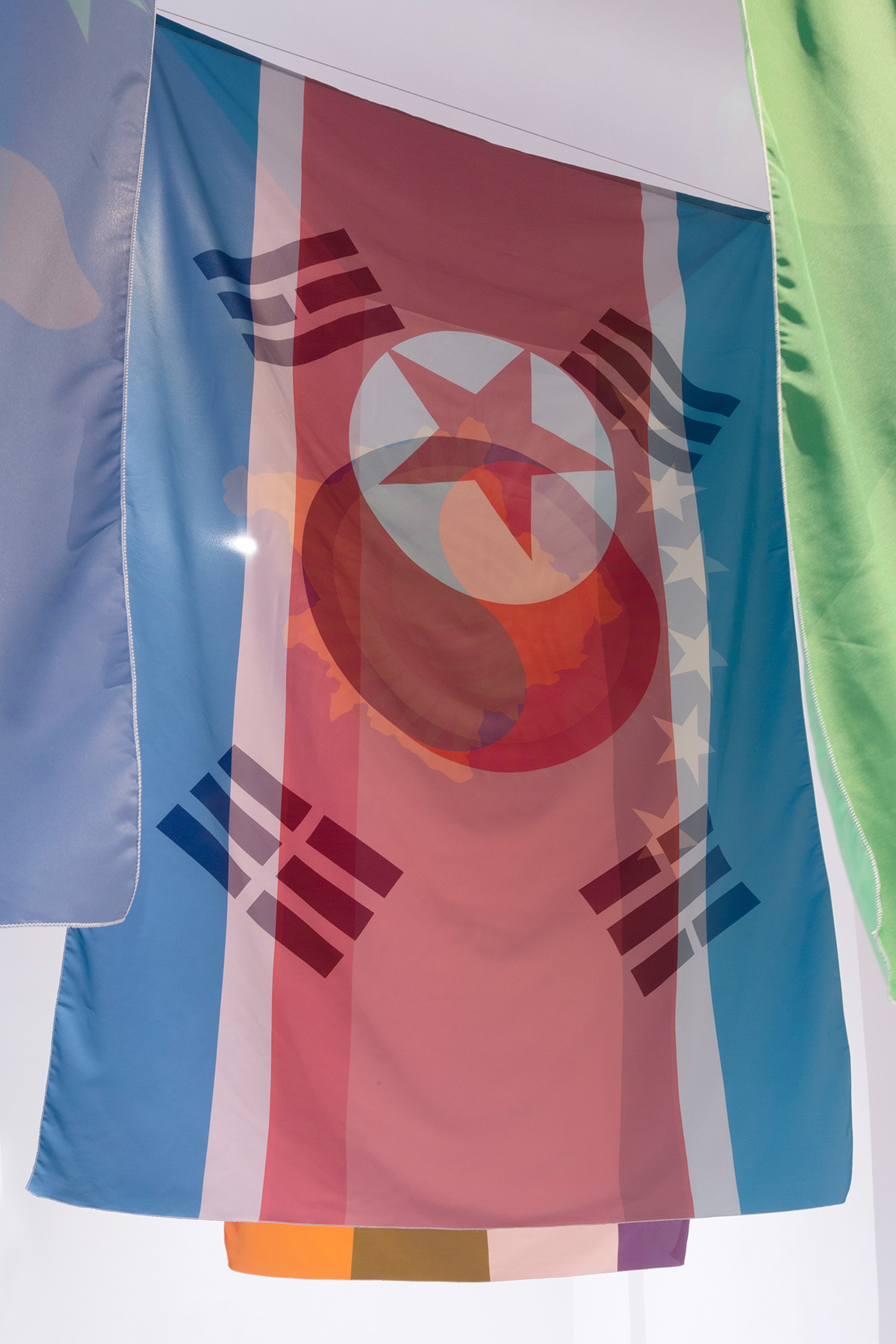 That vision gradually led the artist to her own flag-themed reflection that consists of two pieces, a video and an installation. The video, ‘To Breath – The Flags’, shows 246 national flags of different countries, some of which are forbidden or not recognized internationally, such as North Korea, Scotland or Tibet. Made see-through, they layer, randomly and unpredictably, one another. ‘To Breathe – Zone of Nowhere’, the installation, allows the visitors of an exhibition to walk through 12 of these semi-transparent flags, hung non-hierarchically on the same level, and to actually feel this idea of seamless movement, affordable and available for an exclusive number of people.

It is hard to ignore the challenges that humanity threw itself into, using fossil fuels as the one and only toehold for balance. Or wait, it is actually NOT hard, speaking from the ‘global North’ point of view, where the consequences of that world cracking leaks and pollution are not as present as in the South. 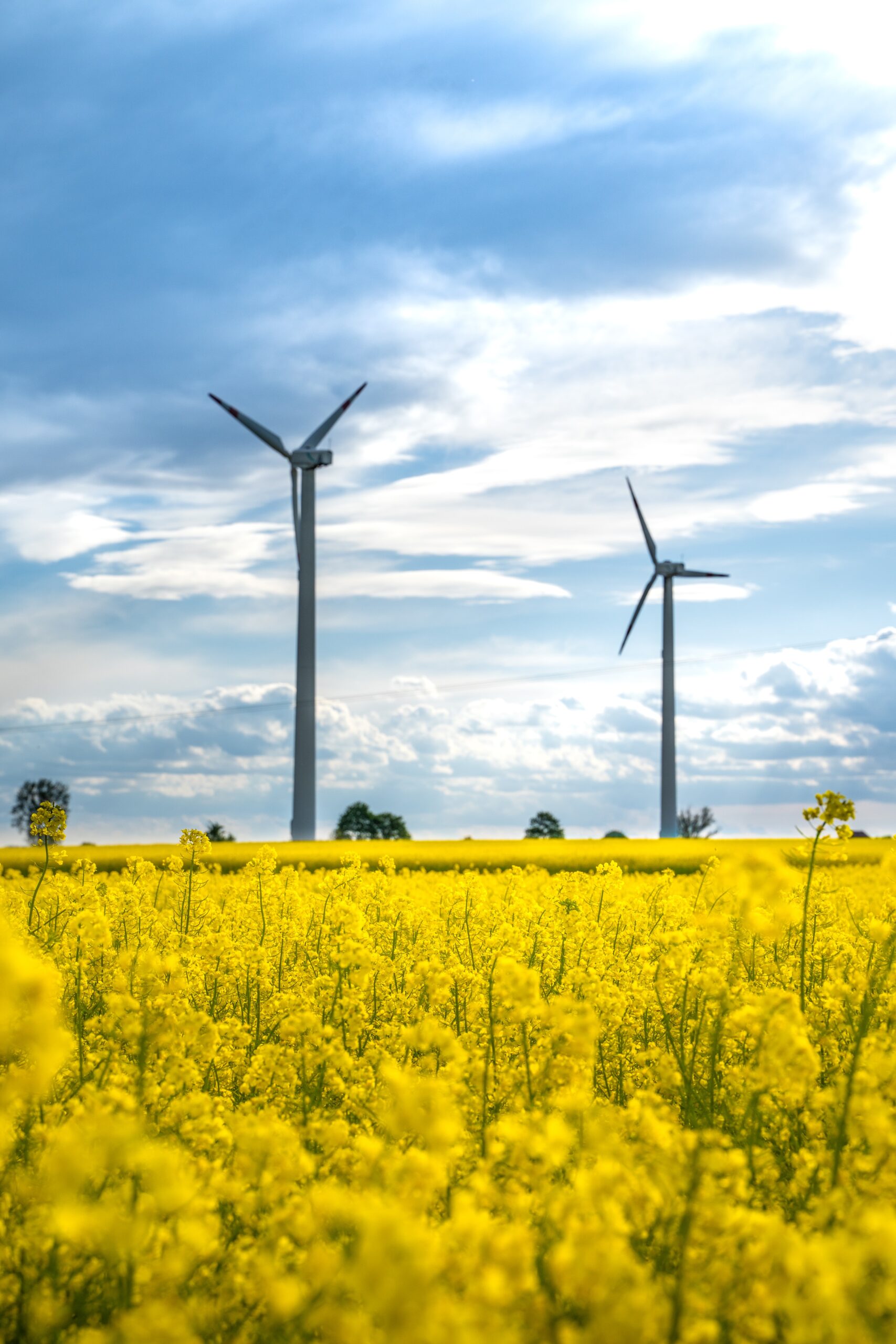 At least, this is what ecological activists present at the annual #cop27﻿﻿, the major climate change conference, could say after listening to what were the final statements of the speakers, who had proposed to put a band-aid on the problem i.e. strengthen the low-emission energy use, instead of getting rid of the cause.

Speaking of which: an Irish born multidisciplinary artist John Gerrard illustrated what a flag would look like in a state that is completely abandoned, exhausted, sucked to the bottom. This is what he did in his 2017 CG-installation for Somerset House in London. With a team of creators, he made a video simulation of looped smoke in the shape of a banner, coming out of a flagpole. As described on the artist’s homepage, the flag is ‘installed’ at the site of the Lucas Gusher – ‘the world's first major oil find – in Spindletop, Texas in 1901, now barren and exhausted”.

In his line upon the piece, the creator calls ‘vastly raised carbon dioxide levels in the atmosphere [...] one of the greatest legacies of the 20th century’, and proposes that his work becomes ‘a flag for a new kind of world order’. If the changes on our energy usage don’t follow, this macabre comment will become a very precise prediction. 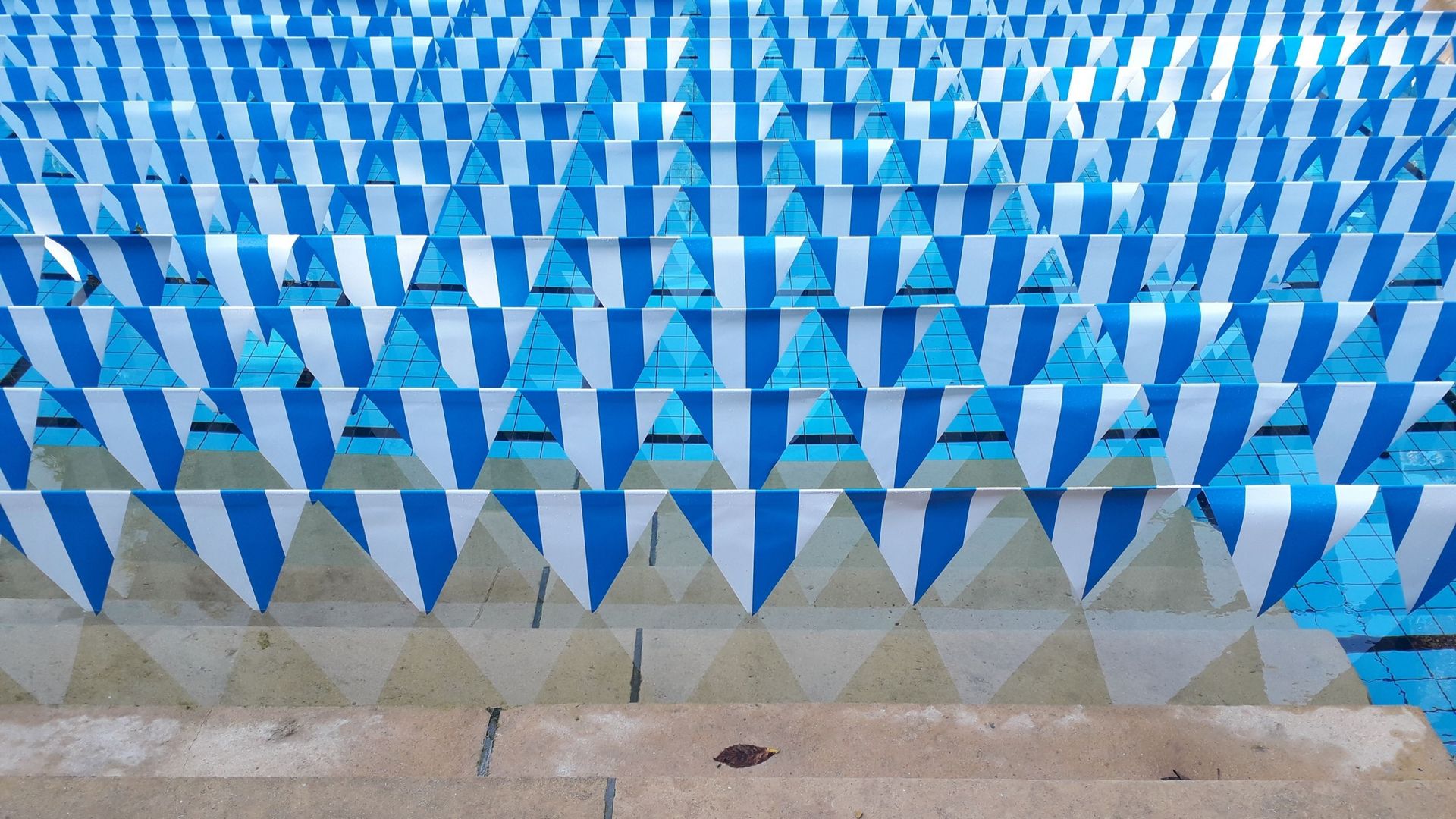 It is tempting to think of Daniel Buren’s piece as the acclaimed French artist’s inner dialogue with his great compatriot Jules Verne, the author of ‘Twenty Thousand Leagues Under the Sea.’ Not willing to be trapped in the jail of the land he escaped, the book’s hero cuts the water in his perpetual vehicle, hosting the narrator as his guest and a prisoner. We can only guess if Buren had that in mind when creating this particular gem, but the similarities are kind of obvious.

His work is 1312 flags, plunged in an open pool: pennants, triangles on point, consisting of colored vertical Buren’s signature bands, alternating white and blue. Using in situ genre, when the visually appealing static objects work as a mise-en-scene depending on the viewpoint, the author dips the spectator into what’s beyond the aesthetic.

The 1312 is the numeric paraphrase of infamous abbreviation against police brutality, which makes those ’flames’ the prisoners that are extinguished under the water. Or are they just hidden, waiting for the right moment to escape?

Six months after the Pandemic began, the Rockefeller Center waved its flags under the skies in support of the world fighting for life. 193 flags were covered with pictures designed by random New Yorkers, regardless of the level of their craft. The project’s purpose was in celebrating love, unity, adversity, diversity, and the locals' resilience during that health crisis and Black Lives Matter protests.

One of the guest artists to take part in the project was Marina Abramovic, who contributed a work of a very recognizable red curve over a white material – the echocardiography (EKG) line of the human heartbeat, turned into a drawing by the artists’ hand red line, symbolizing blood over the universally recognized banner of surrender.

“In this moment in human history, I believe we as a society must conduct ourselves with a balance of strength and surrender. 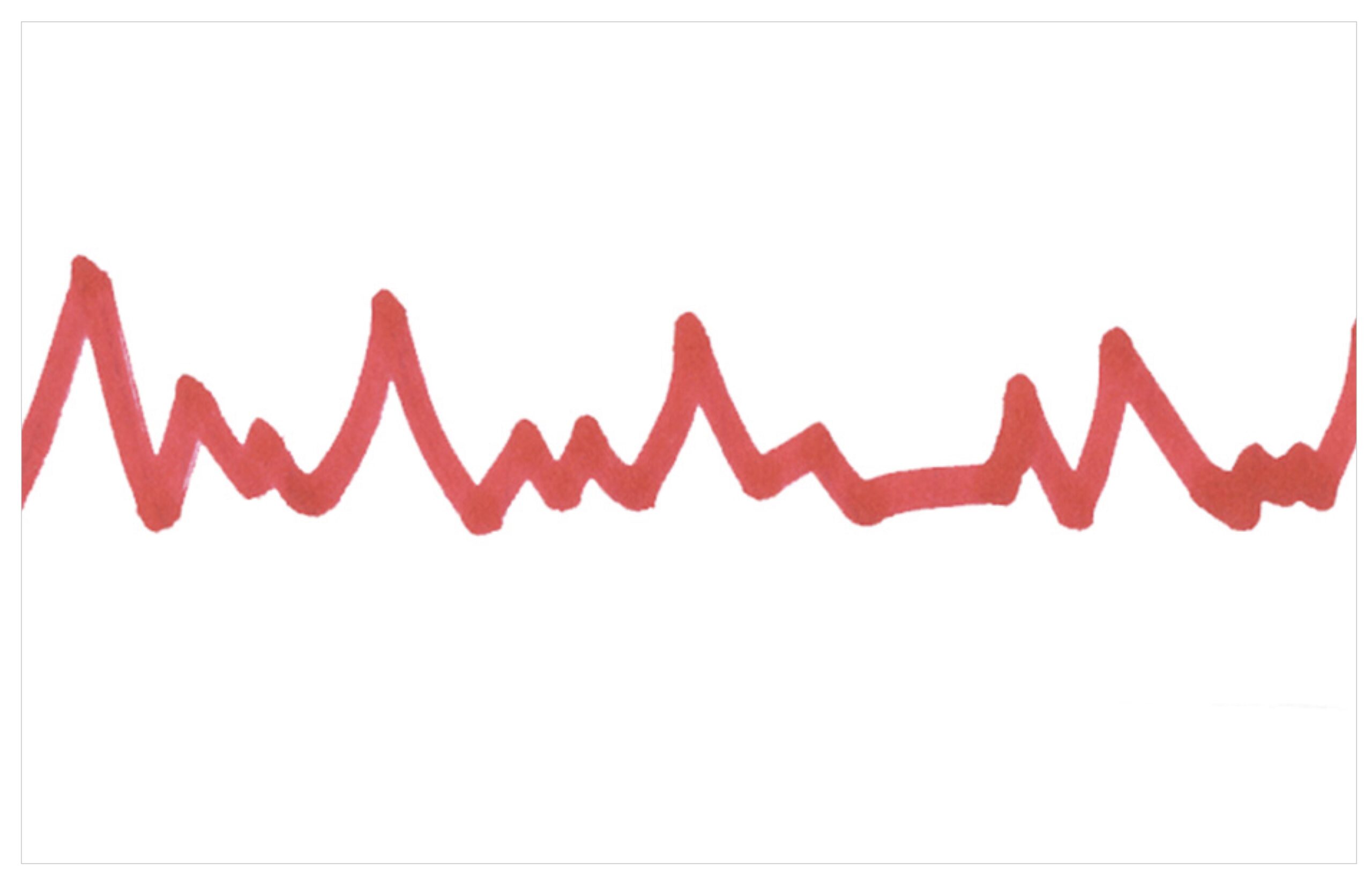 We must be strong in the face of the unknown and at the same time we must surrender to changes demanded of society, our politics, and our planet. The most important thing of all is that we keep going and never give up. I believe that this is the only way we will survive”, Abramovic wrote.

Adding to that, we would say that 2020, with its climate cataclysms, pandemic, new problematic and significant challenges, had literally left humanity to grasp for fresh air. Considering the happenings of that year and a clear sign of forthcoming bigger changes (some of which have already took place in later years), we better do our best to prevent that curved life line from straightening.

Previous
Alfred Pietroni and The Disturbing Beauty of Exile
Next
8 Concepts From Julijonas Urbonas, A Father Of Gravitational Aesthetics 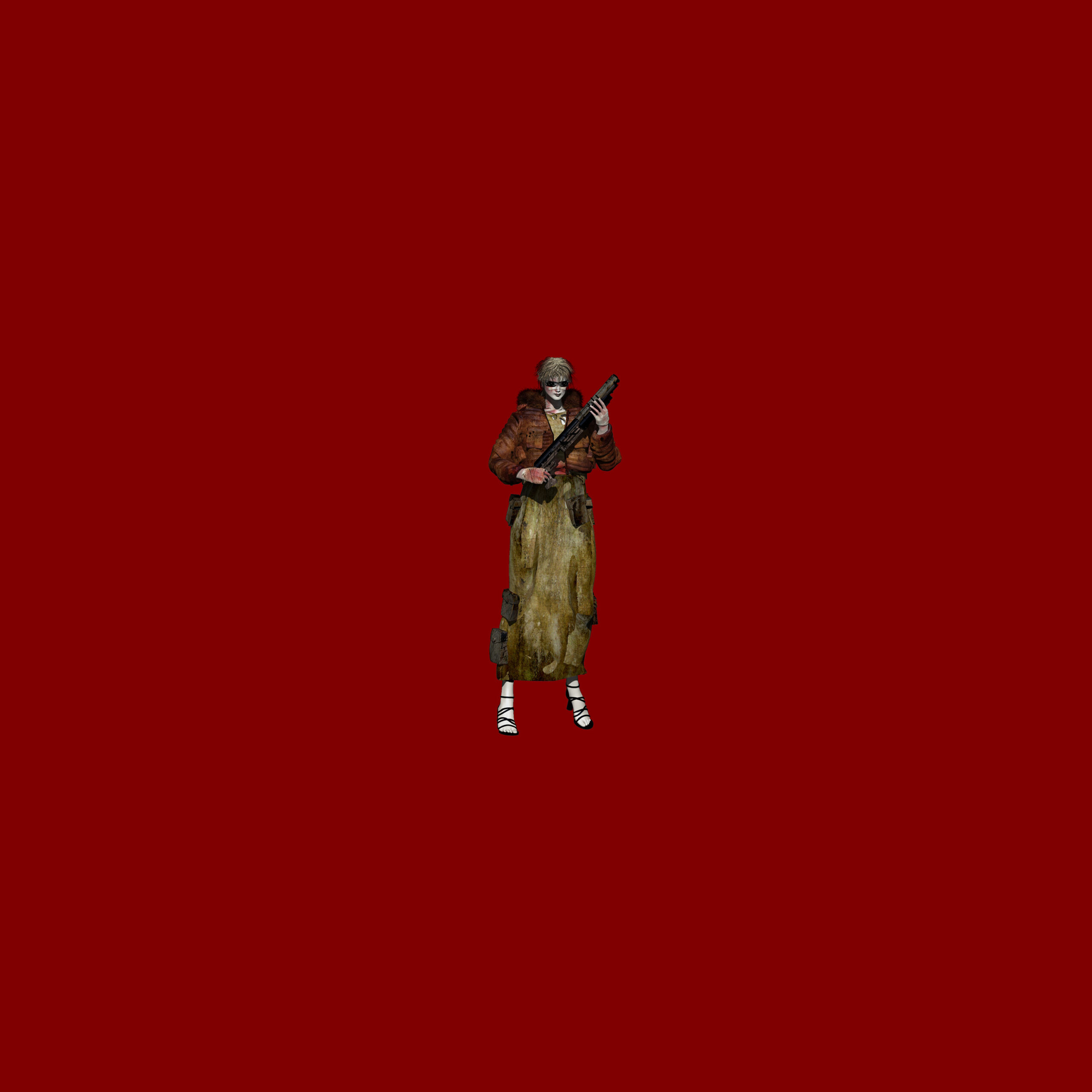 5 Fake Flags That Are Not FalseArticle 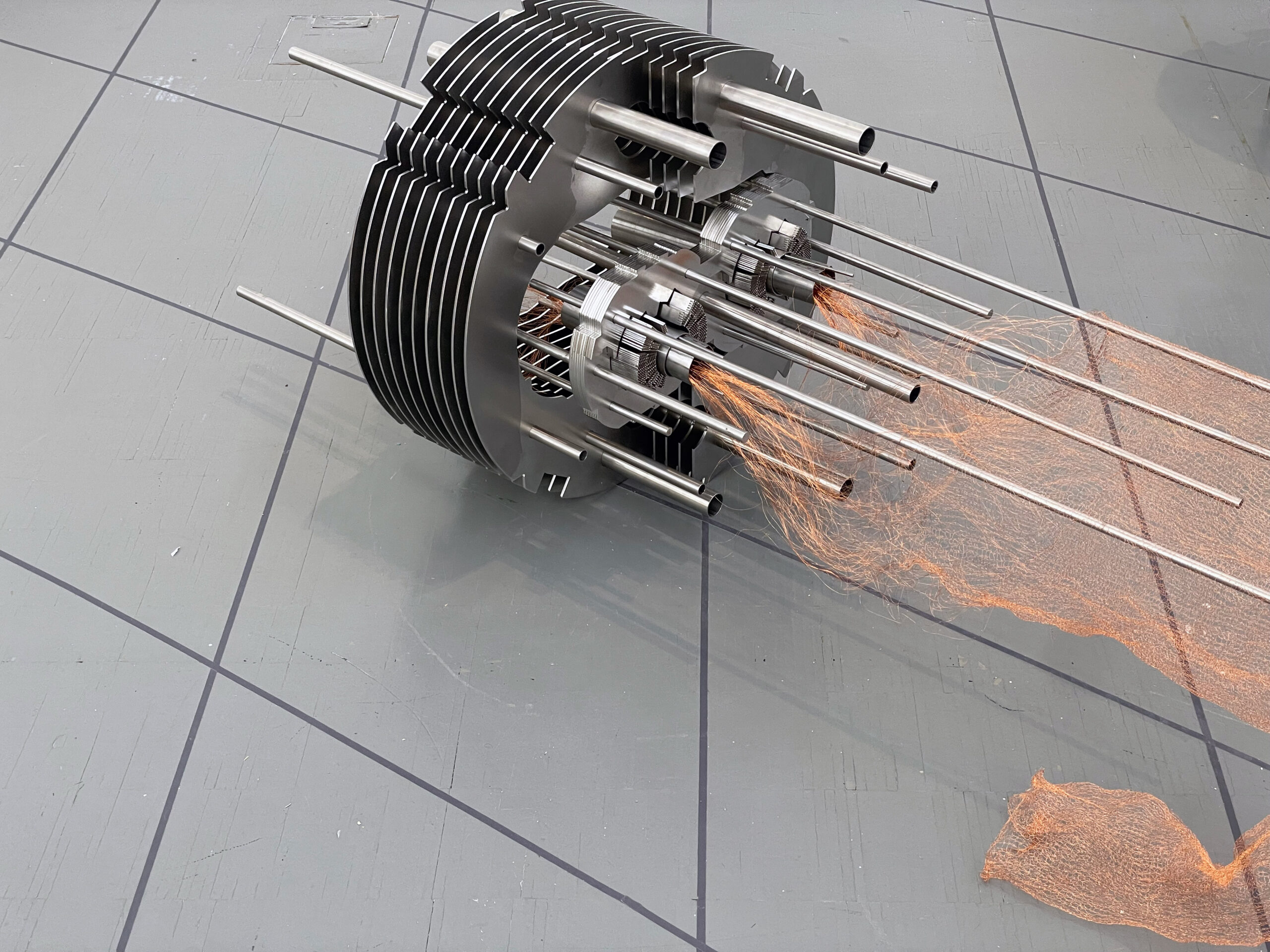